An Ancient Names of Malay Peninsula

Golden Chersonese is the ancient name to refer to the Malay Peninsula by Claudius Ptolemy or Claudius Ptolemaeus (Greek: Κλαύδιος Πτολεμαῖος; c. 90 – c. 168), known in English as Ptolemy, he was a Greek-speaking geographer, astronomer, and astrologer. During the Roman time, the Malay Peninsula developed an international reputation as a source of gold, hence the name was given. 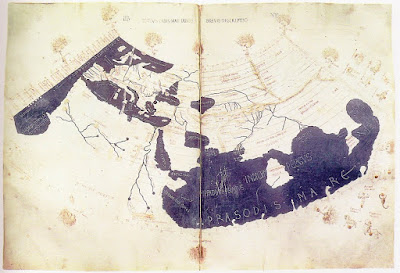 A 15th century manuscript copy of the Ptolemy world map, reconstituted from Ptolemy's Geographia (circa 150), indicating the countries of "Serica" and "Sinae" (China) at the extreme east, beyond the island of "Taprobane" (Sri Lanka, oversized) and the "Aurea Chersonesus" (Malay Peninsula).

Suvarṇabhumī or pali Suvaṇṇabhumī, is the name of a land mentioned in many ancient sources such as the Chronicle of Sri Lanka ("Mahavamsa"), some stories of the Jatakas, and Milinda Panha. Literally, this name means "Golden Land" or "Land of Gold", and might be a region named "Aurea Regio" in "India beyond the Ganges" of Claudius Ptolemy.

There is a common misunderstanding that the Edicts of Ashoka mention this name. The truth is the Edicts relate only the Kings' names and never reference Suwannaphum in the text.[citation needed] Moreover, all of the Kings referenced in the text reigned their cities in the region that located beyond the Sindhu to the west. The misunderstanding might come from a mixing of the story of Ashoka sending his Buddhist missionaries to Suwannaphum in "Mahavamsa" and his Edicts.

One theory is that it referred to a powerful coastal/island kingdom in present-day Indonesia and Malaysia, possibly centered on Java. This theory is based on such a kingdom's potential for power and wealth (hence, "Land of Gold") as a hub for sea-trade and on vague descriptions provided by contemporary Chinese pilgrims to India. Due to the Chinese writing system, however, the interpretations of Chinese historical sources are based on supposed correspondences of ideograms – and their possible phonetic equivalents – with known toponyms in the ancient Southeast Asian civilizations

Ophir (Hebrew: אוֹפִיר, Standard Ofir Tiberian ʾÔp̄îr) is a port or region mentioned in the Bible, famous for its wealth. King Solomon is supposed to have received a cargo of gold, silver, sandalwood, precious stones, ivory, apes and peacocks from Ophir, every three years. 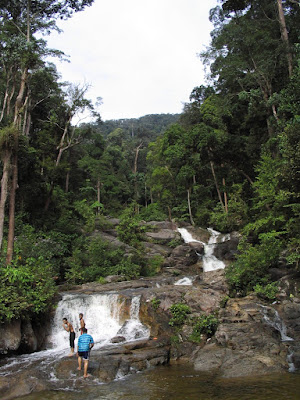 Mount Ophir (Gunung Ledang)
There are a few popular opinions regarding the origin of the mountain's name. According to one opinion, ancient history points to the mountain being the site of rich gold deposits, luring traders from as far as Greece and China. The name ‘Ophir’ itself is thought to have originated from the Hebrew language. In the 14th Century, the Chinese seafarers plying the Straits of Malacca called it ‘Kim Sua’ meaning the ‘Golden Mountain’. Another source said that the Javanese during the period of the Majapahit empire named the mountain ‘Gunong Ledang’, which means ‘mount from afar’.
source :
http://en.wikipedia.org/wiki/Mount_Ophir
http://en.wikipedia.org/wiki/Ophir
Posted by Shah at 6:24 AM